The Farmhouse TV & Film production from The Netherlands has launched, on 18th March 2018 a new cinematic documentary series called "Wine Master".
http://farmhousefilm.com/
The series tells the stories of some of the most prestigious wine-growing families in 5 different wine regions of France, the storytelling of the terroir, taste, and tradition.
The viewers learn about the family stories, their personal drive, and origins, history of the best grapes varieties and vineyard management sharing their skill, passion, task division.
Those families are:
- E. Guigal from the Rhone Valley 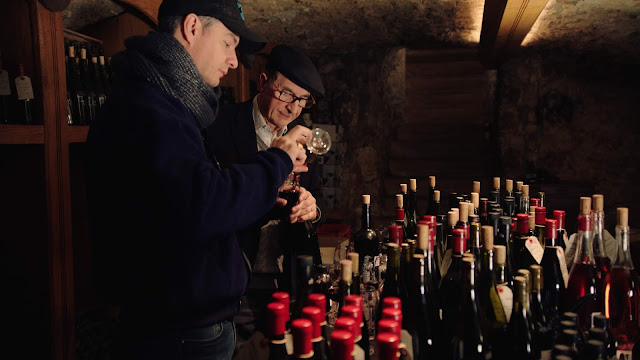 - Bourgeois family from Sancerre in the Loire Valley 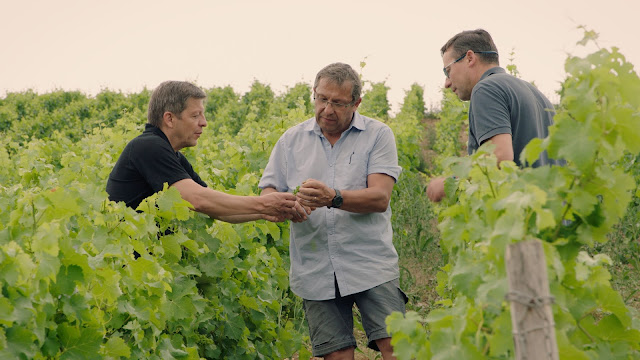 - Chateau Angelus from Saint Emilion with the De Bouard family 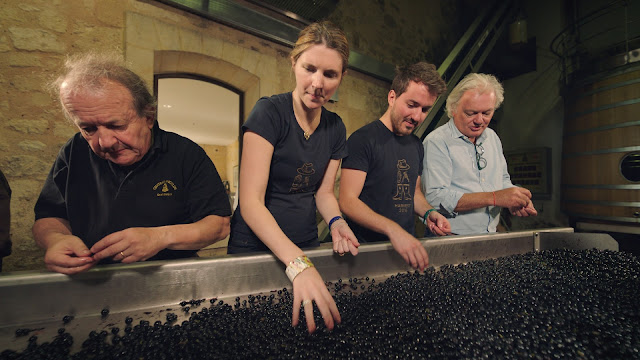 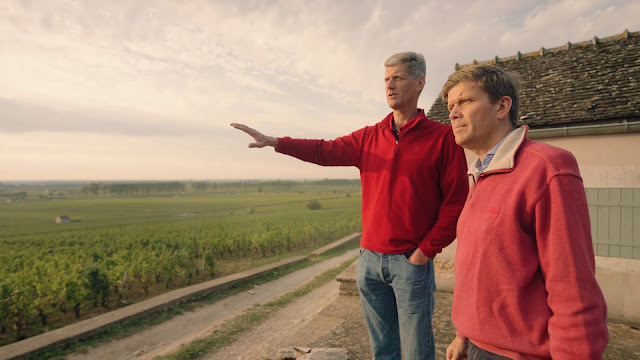 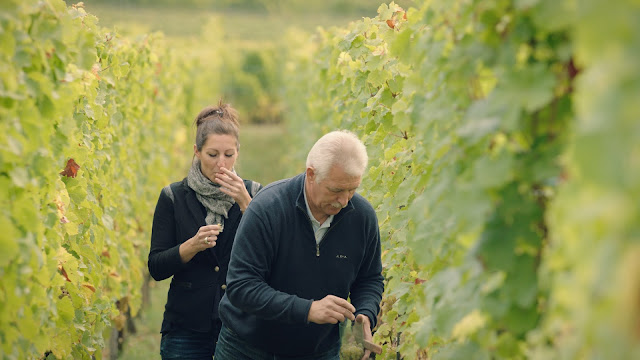 The Series is filmed and directed by Marc Waltman & Klass de Jong, the editor Manfred Poppenk, line-producer Yael Water, sound design Wart Wamsteker the music performed by Noordpool Orchestra.
The CEO of the production company "The Farmhouse" is Klaas de Jong a film producer based in The Netherlands leading this production company for motion picture and television entertainment.
The 5 episodes are made with great aperture and close up, using extreme focus image with pure depth of field, great exposure, and bright light. Watching the whole series gives the sensation that you are almost there next to the winery, barrel tasting and in the vineyard.
Looking at the slope of the Cote Rotie seeing the camera close to the granite soil and hearing the Guigal family is very educative for a point of view of a professional wine taster, or it is very constructive for a neophyte on the wine scene.
Especially the part dedicated to the Lieux-dits (La Turque, La Mouline, La Landonne) of the Roasted slope of the Northen Rhone, it's fascinating. 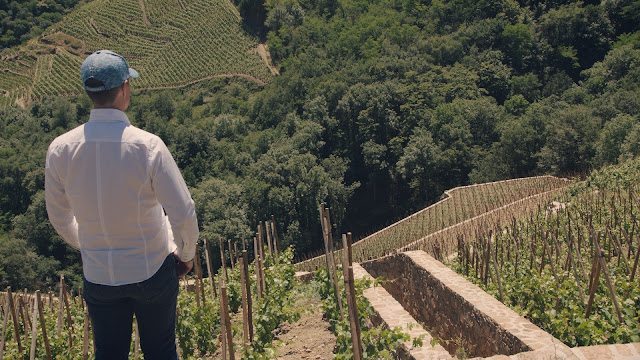 Also make us understand the way the family explains how they use Viognier with Syrah, the use of barrels to achieve finesse, elegance, and austerity from the top Guigal Cuvee to the affordable Cotes du Rhone for everyday drinkers is always an experience.
On the episode of the Loire Valley the Bourgeois family explain their philosophy of the terroir of Sancerre according to the different soil type. From Kimmeridgian soil (gray colored limestone originally identified in Kimmeridge, England) in the village of Chavignol or the Calcaire soil (white limestone) for the easy mineral sauvignon blanc; they talk about their different Cuvee produced and the single vineyards which are extremely important to understand this part of the Loire Valley. Looking at the film shoot of the famous hill in Chavignol as "Les Monts Dammens" or "La Grande Cote" it's a great opportunity for the viewer to understand the beauties of certain terroir when drinking those wines. 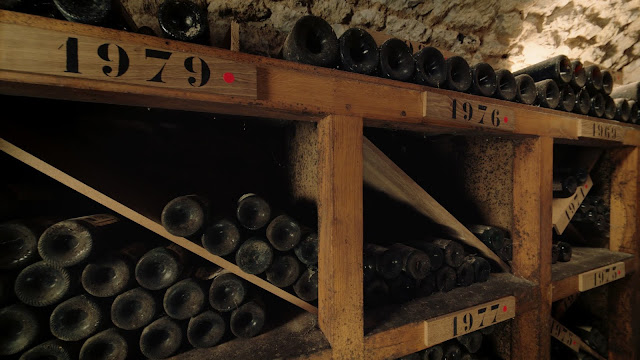 The De Bouard family from Bordeaux explain their skill and tradition on making one of the best wines from Saint Emilion "Chateau Angelus".
They share their family traditions, history and let us understand how it is important blending different grapes to make a Cuvee. They work with vintage characteristics with the use of different percentage between Cabernet Franc, Merlot and Cabernet Sauvignon according to the season, it is extremely fascinating. This episode on Bordeaux models the famous Chateau Angelus and gives an understanding to the complexity and the luxury of this region, with their classification from the old, in 1855 to the revised, in Saint Emilion in 2012. It explains to the viewers the way such a luxury wine is marketed. 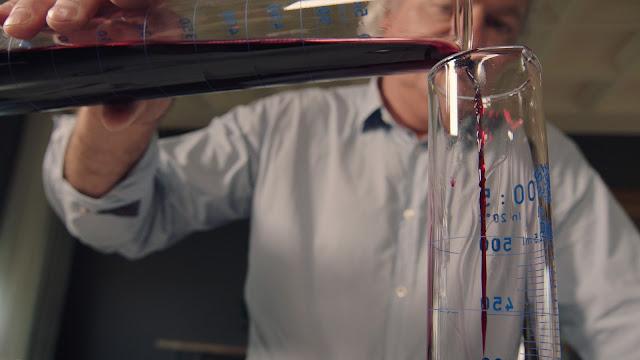 The episode on Burgundy models the Maison Joseph Drouhin, which in the last 130 years has been in the hands of the same family. They work on close to 90 different appellations and offer a fascinating view of the terroirs of Burgundy, expressing the different appellation to the basic Bourgogne AOP to the high-rank 1er Cru and Grand Cru. Hear the way the monopole Clos de Mouches in Beaune, was acquired by the Drouhin ancestor Maurice and see how this family looks after this 1er Cru as their own baby is a truly visual experience. 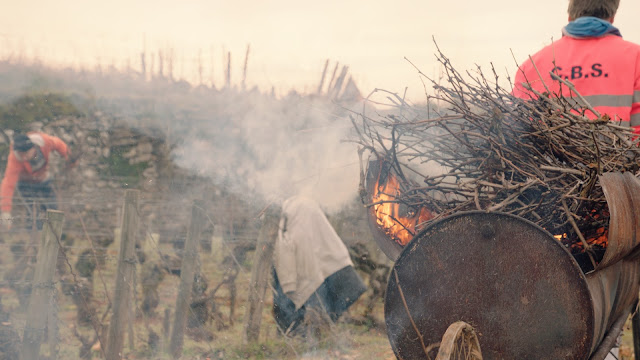 Alsace is the last episode; the model of this region is the family Trimbach in the village Ribeauville in the Haute Alsace. This is another great visual experience to see the philosophy between the old and new generation sharing their skill and experience is quite inspiring. The way the Trimbach family explain the different soil of this region, with the complexity you can find on the final wines with the noble grapes variety of Alsace, gives to the viewer knowledge an extra dimension which is very educative. Also, understand the simplicity of how the famous Rosacker Grand Cru vineyard makes of one the most beautiful riesling in the world is speechless; the famous Riesling is called "Clos St. Hune". Trimbach episode really gives the sense of Terroir of Alsace. 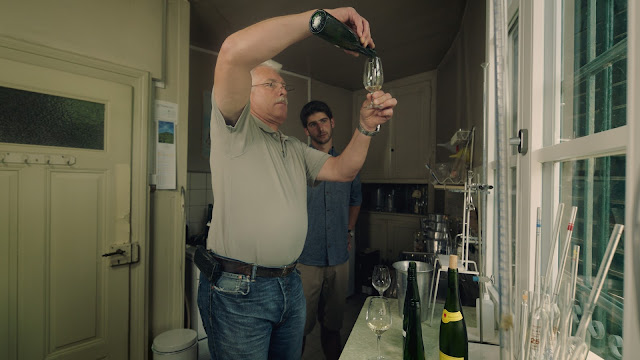 Every episode integrates comments of two MW, from UK Tim Atkin and from Hong Kong-based Jeannie Cho Lee which gives an extra dimension to the documentary.
All the classic platform online make it possible to rent this series "Wine Masters Season 1 ‘France’" on Amazon - iTunes - Vimeo .... 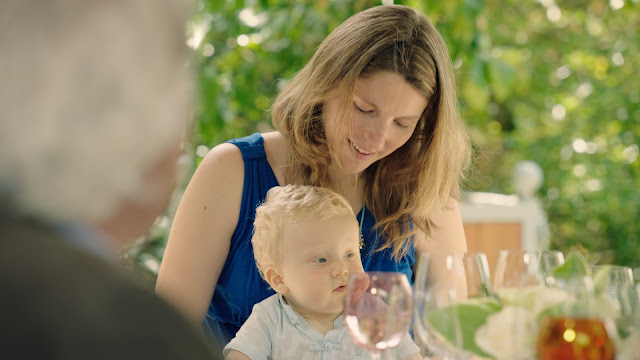 I strongly recommend watching this series; fascinating and interesting! 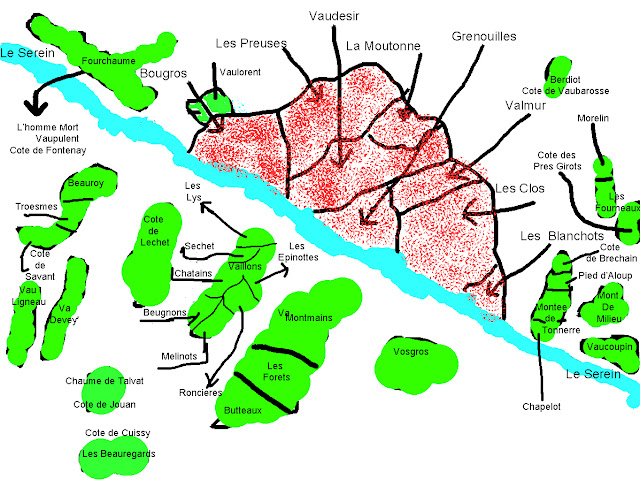 Climat: from the Greek Klima via the Latin Cliamtis.  Precisely delimited plots of land which benefit from specific geological and climate conditions...  Lieux-dits a designated area of land with a historical particularity from a topographical point of view of an ancient story... These two terms in wine always as an interchange used; however, you can find several Lieux-dits within a single Climat... Chablis is a really good example of how these two concepts work together.   See the map above and you can see how many Lieux-Dit compose a climat, in this case, 1er Cru. For example Montmains 1er Cru, a famous block of vineyard on the left bank of the Serein river at the bottom holds two famous Lieux-dit called Forets and Butteaux; according to the INAO, this can be a label on his own or as Montmains 1er Cru.  Vaillons 1er Cru got several different names, those are: Sechet, Les Lys, Les Epinottes, Ronciers, Mellinots, Beugnons and Chatains.  Another good example is the
Podcast 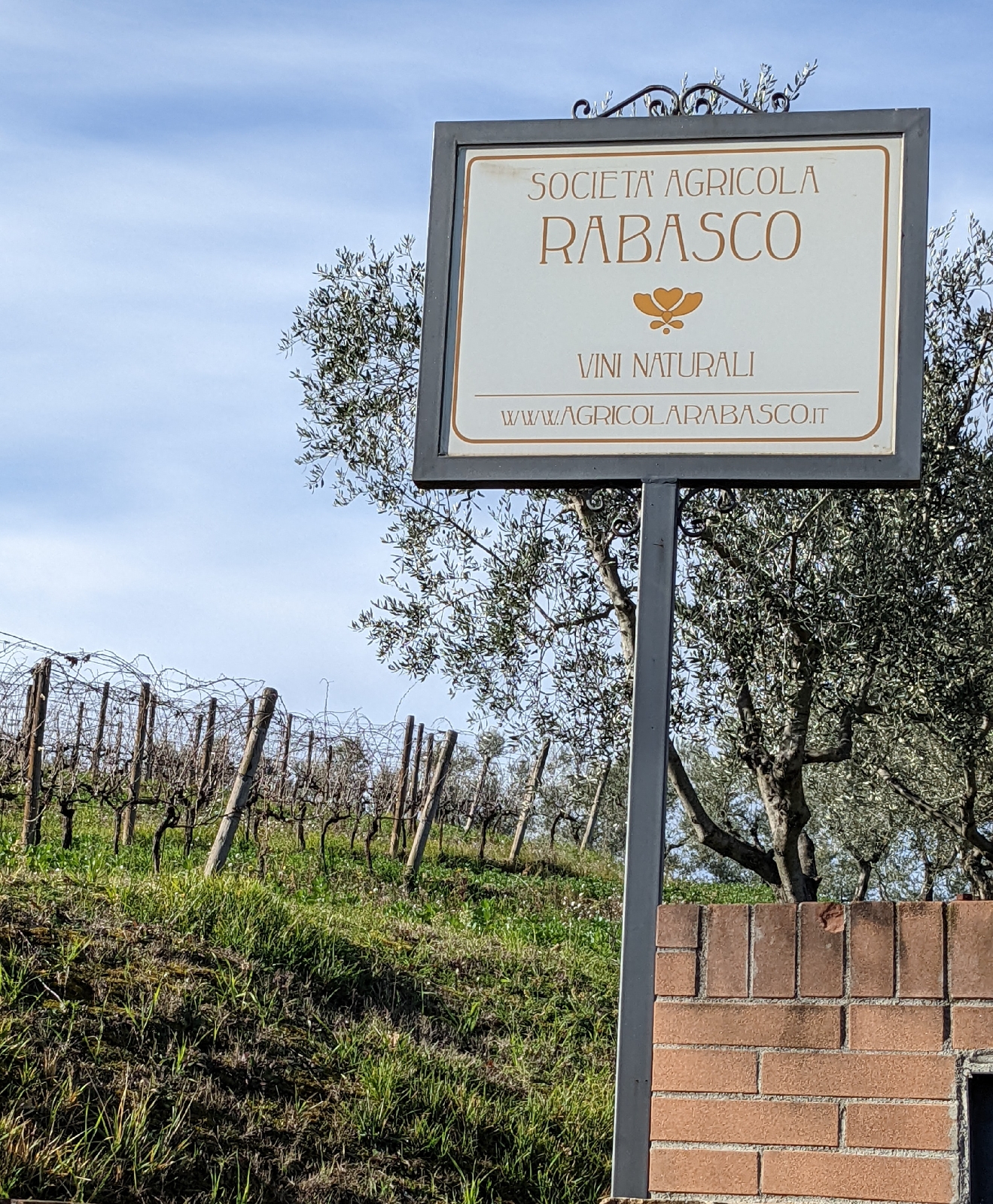 The Rabasco winery is located in a little town called Pianella, near Loreto Aprutino, in the heart of Abruzzo's on 400 meter average altitude, facing the Adriatic sea with La Majella & Gran Sasso mountains on the shoulder, a special place cover with vines and olive's production. Iole Rabasco, originally from Lucania, after graduating in law, decided to start a new adventure in the inland countryside of Pescara and bought a small estate in 2005. Together with her mother Giulia Palese, she realised her dream and launched a project of sustainability and quality, aimed to the purest and most natural aspects of the land into the wine.  .                              Iole and Giulia   The vines, which include varieties of Trebbiano d'Abruzzo and Montepulciano, are spread over 4 vineyards (Cancelli, Concheta, La Salita and San Desiderio) between Loreto Aprutino and the municipality of Pianella, with different microclimates, exposures and land conformati
Podcast 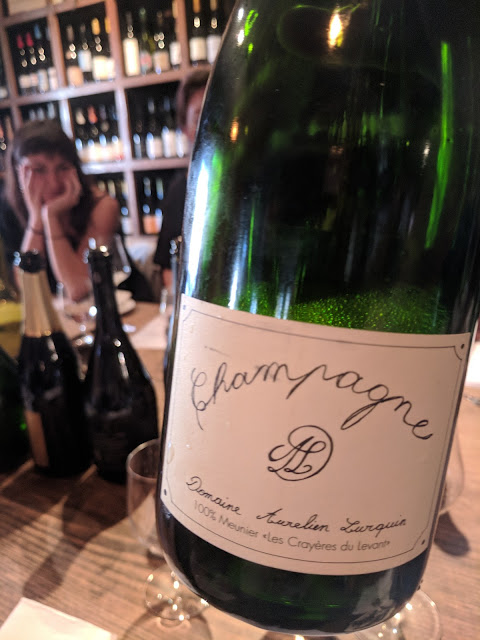 Aurelien Lurquin  Aurelien Lurquin is located in the village in Romery along the Marne River in the department of the Valle de la Marne.  His winemaking background coming from his grand-father a vineyard worker from the Lanson Negociant for several decades.  He starts making Coteaux Champenois still wine at the beginning.  Lurquin holding is in total of 2.5 hectares of vines, certified organic from 2012. This is a very small production around Pinot Meunier and Chardonnay only two Cuvee are made so far each vintage.   Aurelien study oenological and did some experience in Chile (Maule region) and Burgundy (Domaine Pavelot), in 2007 came back home to the Champagne region and start to work in his project to make Champagne from his grandfather holding. To keep alive and sustainable the business still selling some grapes to Leclerc - Briant. All the vineyards are nine parcels in total and are working with a horse, all biodynamic products and green covers crop are in place on
Podcast

raffaele mastrovincenzo
About Me -- a drinker in the space with an ear on the drone glitch music...

Raffaele is a drinker with a great passion for Natural Wine, all wines made by small grower with a sense of place. Raf love music from Free Jazz - Avantgarde - Hip Hop and minimal techno, glitch music and other experimental electronic music. Great passion the cooking. Raf love movies from Nouvelle Vague - Neorealism - German expressionist science-fiction drama - American experimental film - Noir .... Based in Melbourne from Abruzzo. 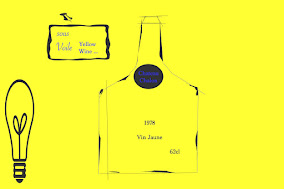 Vin Jaune is one of the rarest of French wines, representing less than 5 percent of the production of the Jura. Its complex, distinctive flavor

The hill of Corton 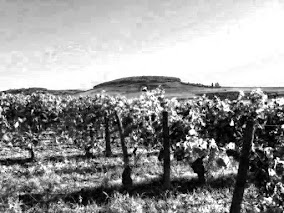 The hill of Corton itself is a large outcrop of limestone, set slightly apart from the main Côte d'Or escarpment. 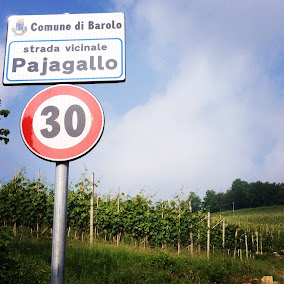 A 12 ha “cru” in Barolo in close vicinity to Cannubi Cru and that is shared with 4 producers.